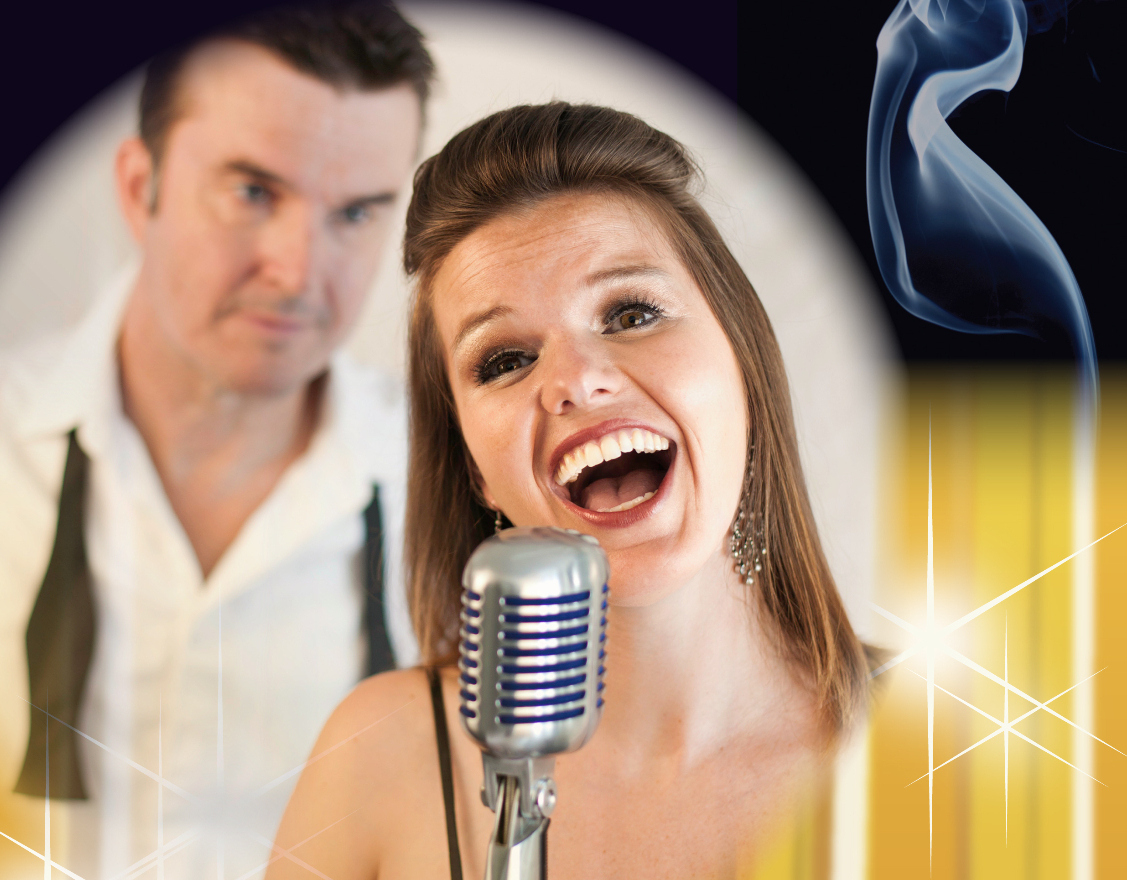 Satin ‘n’ Steel stars Tom Roberts  as Vince, and Kilke John as Teena. The tour marks an exciting time in the development of Roberts and Johns’ careers, not solely on stage, but also off-stage. Roberts and John take on the lead roles during the 16- week tour Satin ‘n’ Steel by Amanda Whittington, and are the driving force behind Roberts & John Productions.

Set against a world of one night gigs in sleazy northern clubs, this gritty comedy reveals the highs and lows of performing in the shady, dark cabaret circuit in the north of England. A sensational mix of classic pop songs Daydream Believer, The Wind Beneath My Wings, Don’t Go Breaking My Heart, Time After Time, I Will Survive and Johnny B Goode help Teena’s and Vince’s tenuous relationship unfold.

A karaoke competition at the Rainworth Miners’ Welfare Club brings together seasoned pro, Vince Steel, and talented beginner, Teena White, in an explosion of talent and creativity. He persuades her to form a duo – and to change her name. As the all-singing and all-dancing Satin ‘n’ Steel, they set their sights on the big time. And as love blossoms, it seems nothing could go wrong. But a guilty secret threatens to jeopardise their designs on super-stardom. Taking her inspiration from the showbiz world of the club circuit, the cruise ship and the holiday camp, Nottingham writer Amanda Whittington has created a warm-hearted story of not quite making it in either the fame business or the love department.

Satin ‘n’ Steel stars Tom Roberts (Emmerdale, Doctors, 2point4 Children) as Vince, and Kilke John(Crazy For You, A Christmas Carol) as Teena. The tour marks an exciting time in the development of Roberts and Johns’ careers, not solely on stage, but also off-stage. Roberts and John take on the lead roles during the 16- week tour and are the driving force behind Roberts & John Productions and the first British tour of Satin ‘n’ Steel.

Amanda Whittington, playwright, said: “I’m delighted Satin n Steel is embarking on its first British tour. It is ten years since the first production but the themes of the play are still relevant, perhaps more so in times of austerity. I’ve made a few changes to bring the story right up-to-date and it’s been great to revisit the characters and think about where they are now. I’m looking forward to seeing how audiences around the country react to them.”

Satin ‘n’ Steel was originally co-commissioned by Nottingham Playhouse and Bolton Octagon and premiered in 2005. Whittington is one of the UK’s most popular playwrights. Her plays include Be My Baby (Whittington’s debut play in 1998), Ladies Day, the award-winning Bollywood Jane, Amateur Girl and the adaptation of My Judy Garland Life which opened to huge critical acclaim at the Nottingham Playhouse earlier this year. The Guardian said ‘…since she made her debut with Be My Baby in 1998, Whittington has quietly and consistently built up a body of genuinely popular, accessible dramas whose raucous humour and lightness of touches belies the dark, often disturbing subject matter beneath’.

Satin ‘n’ Steel is directed by Gareth Tudor Price the former artistic director of Hull Truck Theatre Company. Tudor Price now works as a freelance director across the country and credits include Bouncers, Up ‘n’ Under, Educating Rita, Cooking With Elvis, Neville’s Island, The Office Party (New York) and Hard Times. TV and film credits include GBH, The Monocled Mutineer and Heartbeat.

Satin ‘n’ Steel is under the musical directorship of Greg Arrowsmith. Arrowsmith comes on board with an impressive list of credits, in the UK alone they include: Hairspray and the Far Pavilions at the Shaftesbury, Cole Porter’s Aladdin and Shall we Dance at Sadler’s Wells, The Rise and Fall of Little Voiceat the Vaudeville, Chitty Chitty Bang Bang at the London Palladium and Mykal Rands new production of Smokey Joes Café at the Landor. UK tours include Chess, Calamity Jane, Kiss me Kate, A Chorus Line, Noel Gertie, Chitty Chitty Bang Bang and Jolson & Co.

The production is designed by John Brooking, lighting by Graham Kirk and sound by Sam Burkinsha. The production, directed by Gareth Tudor Price, tours throughout the UK from 26 March to 4 July 2015.